Franchise Opportunities Network is Happy To Announce Our 2019 Scholarship Winner 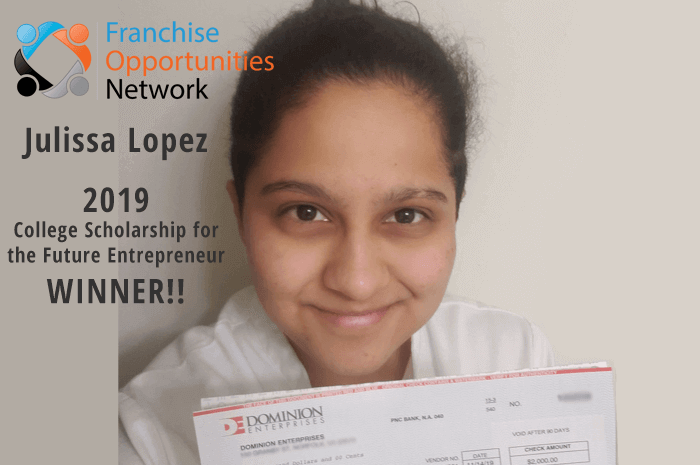 Franchise Opportunities Network ran a $2,000 "Scholarship Contest" from June to September of 2019.

The scholarship is for use towards college tuition, books, or other expenses associated with the winning student's schooling.

Students were asked to write an essay answering the following questions:

In 800 words or less, tell us about an entrepreneur or business founder that you admire and who has inspired you to become an entrepreneur. What about their story stands out to you as unique? What values that they carry do you hope to carry with you, as you develop in your career?

We received 105 entries for this contest, and are happy to announce the winner is Julissa Lopez.

"After getting my Bachelor's degree in journalism, I felt I wasn't following my real dream and started my journey into culinary arts that same fall. I decided to stay close to home because I'd missed my family and friends long enough. Now, I'm dedicated to food day and night, studying a couple days a week and working in a kitchen for the rest. It's busy work, but I love it. When I'm not doing those things, you can usually find me reading (usually about molecular gastronomy) or planning my next trip (I'm a big traveler). In the future, I hope to learn from great chefs around the world and be able to bring their culture, food and stories back to where I settle down."

Nothing has ever held my attention more than food does. I remember sitting in the kitchen, my little knees pressed against the cold countertop while my mother told me the perfect way to stir. Every day, I craved learning something new, hearing the sizzle of food on a skillet, and I wanted to bring that to others.

Now, I’ve seen what a vision like that can lead to.

For Chef Grant Achatz, that connection to food made him an entrepreneur and even a visionary leader. Chef Achatz grew up in much the same way. He cooked alongside his parents, taking in the sights and smells, and dreamed of a world beyond kitchen meals and diner food. In fact, his ideas were seen as unorthodox and off the wall, but he didn’t hesitate.

After receiving a structured education from the Culinary Institute of America, Chef Achatz worked in renowned kitchens like Charlie Trotter’s and The French Laundry. Even in these places of distinction, he had a unique vision and he wanted to take food to the next level. He pushed for flavor combinations that chefs around him were hesitant about, looking for a kitchen of his own to create something new. And in 2005, he finally did that when he opened his Chicago restaurant Alinea.

At first, others were hesitant to approach his restaurant where things like rosemary vapor were used to make a dish taste better or edible helium balloons were on the menu, but Chef Achatz accepted nothing but the best for himself and his kitchen, and in 2006, Alinea was named the best restaurant in the U.S. by “Gourmet” magazine.

In the midst of all this, Chef Achatz faced an illness that his co-owner Nick Kokonas called “Shakespearean.” He was diagnosed with cancer in his tongue, and the prognosis seemed to be complete loss of everything that allowed him to taste. Chef Achatz, however, would have none of it. He found an alternative treatment that brought him to the hospital twice a day, and even then made sure to schedule them on hours where the restaurant was at rest.

The first time I saw Chef Achatz’s food, I was struck. I didn’t know what to say. The menus were outrageous. The presentations were something out of Cirque du Soleil, and I was enamored. I loved the uniqueness of it all and his vision to make a meal more than a meal, but to make it an experience. More than that, however, I was inspired. Not only was this man a successful, revolutionary entrepreneur, but he was a great chef.

Chef Achatz’s story is unique at its very core. No, growing up with parents who teach you to cook isn’t unusual, but taking your very first lesson of how to make Jell-O and carrying it on over decades to make a translucent pudding for a see-through pumpkin pie is the “new” of it all. From his humble beginnings, to finally finding his dream and facing tragedy right in the midst of it all, he carried himself with dignity and never lost his passion. And it’s because of those very things that Chef Achatz is still the success he is today (but now with 2 additional restaurants under his belt).

The chef has many traits I hope I can carry with me throughout my career, but there are a few I know are essential to make it. I want to exhibit the same passion, drive and dedication to my craft that Chef Achatz does, and I want to have that same spark of unorthodox genius.
My hope is, with this scholarship and my studies, I can really open the door for something brand new in the field of food. Thank you for taking the time to read my entry.