Franchise Opportunities Network is Happy to Announce Our 2018 Scholarship Winner 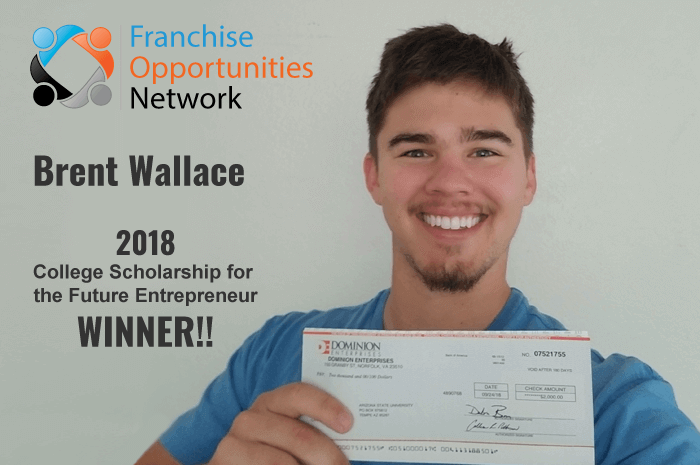 The scholarship is for use towards college tuition, books, or other expenses associated with the winning student's schooling.

Students were asked to write an essay answering the following questions, in 800 words or less:

1. If you became an Entrepreneur, what type of venture would you start and why?
2. How will college help prepare you to become a successful Entrepreneur?

We received 135 entries for this contest, and are happy to announce the winner is Brent Wallace.

Brent chose to attend ASU because he loves his home state of Arizona. He is very passionate about human space exploration. He likes volunteering in the community at STEM outreach events to educate local children and get them excited to pursue careers in math and sciences. He also enjoys camping and hiking with his friends.

Nothing is sexier than rockets. Nothing is less attractive than the dorm of the guy building them. My desk sits littered with textbooks, diagrams, and miscellaneous electronic components. Data sheets crowd the overloaded web browser on my computer, and scribbles of circuit schematics vie for real estate with a mess of wires and coffee stains. My name is Brent Wallace. I am a sophomore electrical engineering student who designs rocket flight control systems. I have an idea for a commercial-off-the-shelf flight control unit which can be used in rocketry and drone applications, and I am already designing and testing. T-minus four months.

My team flew its first rocket in the University Student Rocketry Competition, a national endeavor of the top collegiate rocketry teams, and placed second in the nation. My first competition taught me what controls are needed for a rocket; in addition, it taught me exactly what the rocketry market is lacking in its commercial flight controllers.

Current products feature two main sensor types: accelerometers to determine acceleration and vehicle speed, and altimeters to determine the vehicle’s altitude. From this data, the system can make the important decisions to govern trajectory: when to deploy upper-stage motors, when to deploy parachutes, when to abort for safety purposes. However, these sensors are not enough in all situations to ensure safe flight.

This is a lot to take in for a newbie—it’s even a lot to describe in this essay. One can quickly see the desirability of these commercially-available flight controllers: they combine all of the complicated jibber-jabber into one neat package and handle the hard work for the consumer. For this same reason, I like many, chose a commercial flight controller rather than designing one myself, but I quickly learned that current products are not up to snuff. They are complicated (really undesirable in a product that sells on simplification), unreliable, and unfriendly to use; in other words, products that were thrown together by someone in their garage rather than developed in a rigorous research environment.

The lack of features resulted in dangerous malfunction. At the time when the stages of our vehicle needed to separate, the nose was not pointed straight up, as is needed for a healthy trajectory. Instead, the vehicle was tilted, so that it flew more horizontally like an airplane. Such a situation is a serious safety hazard to all personnel on the range, which often includes dozens of families with children. But the commercial chip thought everything was fine. Accelerometers cannot detect tilt, so it deployed the second stage motor on a partial separation, ripping a huge hole in the reinforced carbon-fiber body. Imagine if the rocket had been forced nose-down—deploying the second stage motor would have turned it into a ballistic missile pointed straight at where it came from. Rogue rockets are an all-too-common occurrence today. The damage (and the hazard) can be avoided with a better option.

This isn’t my first rodeo anymore. Gone are the days of commercial flight controllers; now I am developing my own. I am poring over datasheets, selecting quality components which are more capable and reliable than anything on the market. Current products were developed by hobbyists, this one by an engineer.

Chief among the improvements of my design is the addition of gyroscopes to the sensor array. Gyroscopes measure how fast something is spinning—exactly the measurement we needed to avoid the situation of our first competition rocket. It also incorporates components which were designed in other industries to higher standards. For example, the central computer (a proven microcontroller manufactured by Microchip) costs just $5. The entire unit will be assembled on an attractive, house-designed printed circuit board with a final parts cost of around $50. Market flight controllers regularly sell for $200.

The new features go on and on. The important takeaway is a polished, thoroughly-designed product with a myriad of applications that extend beyond the rocketry industry. For example, my design can be installed on a drone. Flight orientation is a crucial part of drone operation—pilots need to know the altitude, how fast the drone is moving, and where it is pointing. The enhanced features of my system include everything drone builders need to implement precise flight management systems at a fraction of current costs. The drone industry is a lucrative, young market in need of new products like this one.

In conclusion, my college research has given me the unique opportunity to develop a marketable product. My venture has started in college rather than afterward. I hope to continue developing my flight controller, and this scholarship is an important financial opportunity to continue my entrepreneurship. Thank you for reading this essay.