Why NOW is the Time to Make Your Franchise a Reality 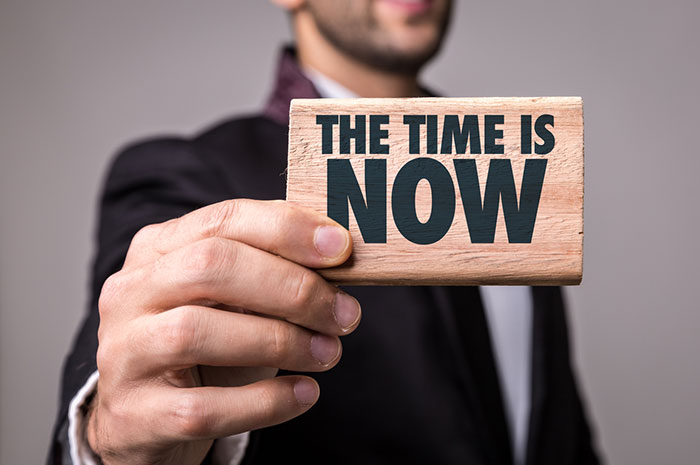 Why NOW is the Time to Make Your Franchise a Reality
What are you waiting for? No, really, what's holding you back? When owning your own business is something you've always wanted to do, and being your own boss is a long-term dream, why aren't you putting that plan into action?
Really, your answer doesn't matter. Life or circumstances got in the way of going after you wanted, and that's ok. What matters isn't what held you back, but what's going to push you forward. What will you do to overcome those blocks and instead, work toward success as a franchisee?
If you've been putting off your franchising dreams, it's time to push those distractions to the side. Stop putting your wants on the back burner and go after them NOW.
Why? Because what you do now will affect your FUTURE. What if you had worked toward your own business a month ago? A year ago? Think where you could be at today. Instead, you are in the same boat – waiting and lollygagging or giving yourself excuses as to why it can't be now.
When really, it should be NOW! It should be a top priority in your life. If business ownership is a dream of yours, make it happen. It will be your career, it will make you happy, it's a goal to go after, so start making steps to put it into reality.
If you're working a demanding job, it's understandable that you don't have much time to devote to a new venture. (Or if you're a parent, have family members to take care of, have several responsibilities, etc.) That's ok. You do not have to give up your current way of life or commit to taking on additional full-time hours. In fact, thinking this is the norm is a common reason folks push their franchising dreams on hold. They think they don't have the time.
But did you know you can prep in your free time? There is no set formula for opening your franchise. Work when you can. Stay up late two nights a week, skip a few lunch breaks and send out emails, take an afternoon to make necessary calls. You will likely have to make a few sacrifices of your free time, but remember that you're working toward your dream. A few hours here and there won't matter in the grand scheme of things. Besides, it's exciting! You should be EXCITED to work toward your franchise. And when work is fun, it doesn't feel so much like fun. You're more likely to get more done in a shorter amount of time, or without even feeling like you've "worked" at all.
Sit down and determine what's a good time for you to work toward this dream. Before you know it you'll get in a groove and know when and how you need to work in order to move forward with your franchise location.
Standing still will only leave you where you are today. Stop putting off your dreams, especially as they can be achieved by making small (yet effective) steps toward your ideal career. It's the job you want, the freedom you want, the ability for growth that you're after, room for expansion and employing others – and much, much more! The only downside is actually putting your plan into action – is that really such a downside at all? Or is it simply something you've been avoiding and need to finally give the time and effort it deserves?