Traits of Kids Who Grow up to be Successful 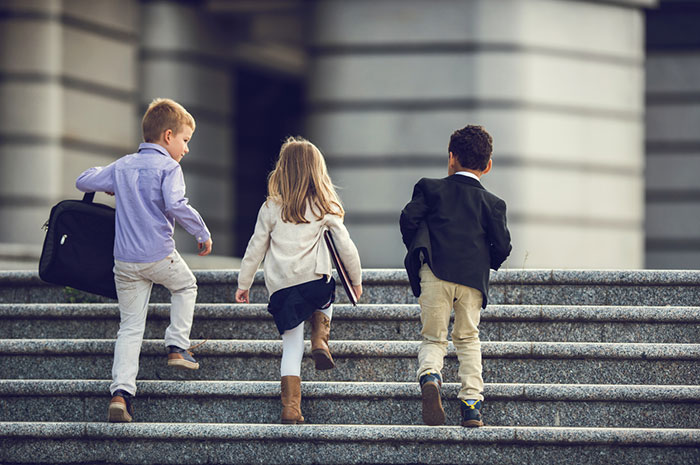 Traits of Kids Who Grow up to be Successful
You say stubborn, we say someone who’s born to be a leader. You are frustrated with the child who does their own thing, and we see someone capable of making decisions. These traits – and so many others – are held by successful business owners. And though we might not think about kids having professional skills at the time, these same traits are ones they hold from the very beginning.
How their personalities are formed, battles they choose to fight, quirks that develop over time – all of this (and more) is a good indication of who a child will grow up to be. Or what type of job they might one day have.
Whether you’re a frustrated parent dealing with less than desirable behavior, or looking to get into business and thinking back about your own personality, consider these childhood habits that are great for eventual business.
Independent
Who needs the help of a grown up when they can do it themselves? Of course, this might lead to disastrous results, but it also shows a personality that sees no limits. As well as the ability and willingness to learn new skills. Whether or not a task was in your wheelhouse previously, the independent person goes out and finds a way to get it done. And along the way, they learn a new skill. In franchising, it means finding answers on one’s own, making sure things are completed on time, and more.
Stubborn
This is a trait that drives parents up the wall, and it’s not hard to see why. Who wants to deal with someone who never listens and does their own thing, regardless of the consequences? (This is true of all ages, not just kids.) Repercussions aside, however, stubbornness shows a person who knows what they want, and who goes for it. Hopefully, at some point along the way they learn to take advice, too. But all-in-all, being stubborn is not always a bad thing!
High-Energy
They play hard, they crash hard. Whatever they’re doing, they’re all-in. These kids who hold a lot of energy are more likely to become go-getters as they grow older. Why? They’re not content with sitting still. They need to be on the go, and that means they’re more likely to get done in a single day. No lounging around for these youngins – or adults – they’ve got to be staying productive. That also means they’re more likely to accomplish more than anyone else, all in the same amount of time.
The Tinker-er
Some kids have a natural curiosity. They want things to take apart and put back together – whether it’s a toy meant for doing so, or something for actual use. (Actually, all-the-better if it’s the latter.) These kids learn how things work. They don’t just want to play with something, they have to understand the inner parts, how to put them together, etc.
These kids grow up to be handy persons. They can fix almost anything and they save a bundle by buying things used, or fixing what they already have. (Ideal in franchising!) It also shows a personality who’s willing to sit and learn, rather than pawn a job off onto someone else.
The Boss
We’ve all seen kids who like – or rather have – to be in charge. They’re the boss of their surroundings, and what they say goes. Whether or not they listen to authorizes, when it comes to playing with others their age, they are head honcho. Later in life, this leads to bosses, business owners, and franchisees, as well as other professions who don’t mind being in charge. While, once they grow up, they don’t have to be in the driver’s seat, but it’s worth noting that they don’t mind doing so. This leads to a level-headed professional who can get things done without being timid or getting walked over.
Whether or not you had these traits as a child, it’s good to know how they can help mold your professional life. As a business owner, there are so many personalities that can help you to be successful. Especially those that are considered less desirable in early ages.
To learn more about business success and personalities, check out our previous blogs.