How Much Do Franchise Owners Make a Year?

One of the first questions people ask themselves when they start thinking about how to start a franchise is “can you make a good living owning a franchise?” It is a very good and important question, and definitely should be on the list of things to consider before deciding to open a franchise. However, it doesn’t have a quick and easy answer. The franchise owner salary will depend on a number of different factors, including:

How Much Does a Typical Franchise Owner Make by Industry? 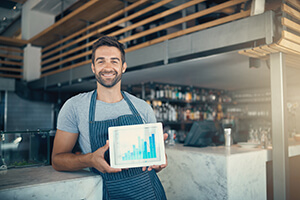 The example we gave above was for a franchise owner in the food and drink industry, which is one that many people think of when they consider owning a franchise (fast food and restaurants being very popular franchises most of us see every day). But how does this compare to other franchise types? According to Zippia, these are the average salaries from some of the most popular franchise industries:

How Much Does a Single Franchise Owner Make?

Owning multiple franchises can be profitable even more than owning a single location. This presents great franchise owner opportunities for future growth if you decide to become a franchise owner and would like to increase your salary. Some franchise owners go on to own more than two locations, so there is almost unlimited growth potential if being a franchisee is a good fit for you!

Is Owning a Franchise Profitable in the First Year?

Like nearly all businesses, most franchise locations will not be profitable in the first year. The upfront expenses to become a franchise owner like rent costs, renovation costs, and other set up costs will be tens to hundreds of thousands of dollars (depending on the franchise and location). Many people will take out a loan or other financing that will need to be paid back, with interest, on these up front costs. Additionally, the first year of running a business will likely be slower, since customers do not know about your location yet.

Opening a franchise has some major advantages over starting a new business from scratch, though. Because you will be operating as an established brand, a new franchise will start with an established customer base and brand recognition right off the bat. The additional support from the parent company for things like training, advertising, and operating guidelines make it that much easier to get started rather than trying to build everything yourself from scratch.

Some new franchise owners prefer to keep their existing jobs or rely on family financial support during the first year or two of starting a brand new franchise to make this financial transition more comfortable. Careful consideration of your own budget and net worth are important before making the decision to start a franchise. Try our net worth calculator to help you consider how much you can afford to spend on the perfect franchise for you. Our finance center is another great resource for finding out your financing options available to make the move to business ownership easier.

How Does the Owner of a Franchise Make Money?

Let’s look at an example of a hypothetical food franchise to better explain the details. In one year, the Food Franchise:

Is Owning a Franchise Passive Income?

Owning a franchise location or locations is often not considered to be passive income, but it can be. According to Investopedia, “passive income is earnings from a rental property, limited partnership, or other business in which a person is not actively involved.” In general, when you decide to become a franchisee, you will be actively involved in managing the franchise. You will usually:

But there are several franchise opportunities, like vending machine franchises and digital billboard franchises, that are inherently less actively managed. And there are many cases where people open a franchise, set it up to be successful, and then leave the daily running to a general manager. In all of these cases, owning a franchise could be passive income.

Do Franchise Owners Get Rich?

Franchise owners can get rich in the right circumstances. Although there are no guarantees of income with a franchise, starting your business with a proven business model and an established brand gives you a head start. In fact, franchise businesses drive 1.8 times higher sales than comparable non-franchise establishments. As a franchise owner, more sales translates into a higher salary for many franchisees.

In general, established franchises that operate in areas with a lot of demand for their product and have lower overhead costs will be more profitable. Also, people who are able to own multiple franchise locations generally have a higher income than single franchise location owners.

If you are inspired by all the possibilities owning a franchise opens, take a look at our list of The Top 50 Franchises. These provide a great selection of some of the top performing and most desirable franchises with up-to-date information on how to begin your journey with them.

How Do I Find Out What I Will Make as a Franchise Owner?

As we've mentioned before, a lot of factors impact franchise owners' incomes, so there’s no way to know exactly what your salary might be. But there are some ways to get a better idea of what sort of income you might expect as a franchisee:

Franchise Opportunities: Your Next Opportunity is Calling

Owning a franchise gives you the chance to be your own boss, set your own schedule, and take control of your career by operating a proven business model. Franchise Opportunities is passionate about connecting the right people to the right franchises.

Our easy-to-search site puts you in the driver's seat to explore the wealth of information about franchise options that would be the perfect fit for you.

You can customize a search by:

If this all sounds good so far, you should browse our franchise listings now, and sign up for our newsletter, so you stay up to date with the newest opportunities as they come up!