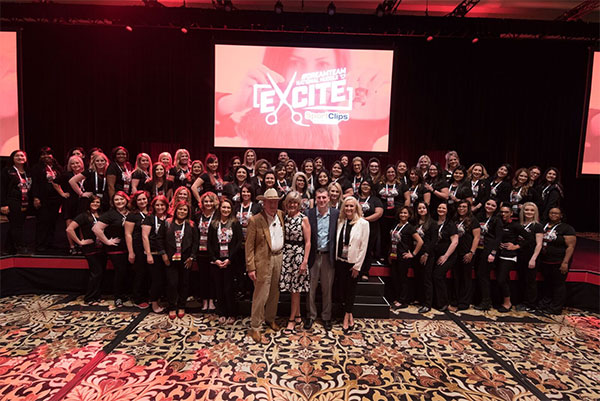 LAS VEGAS (May 4, 2017) – "Excitement" was the message for Sport Clips Haircuts at its recent National Huddle. Founder and CEO Gordon Logan and President Mark Kartarik shared exciting news about franchise growth, stylist career opportunities and support for multiple charities across the country. Highlights include:

"I believe the secret of our success has been both the right concept well executed, and very importantly, our values of 'doing the right thing, doing our best and treating people the way they want to be treated,'" Logan says. “When we started Sport Clips, we developed well-documented systems and built a strong support team before we awarded our first franchise in 1995. The result is more than 20 years of solid growth, a system with over 1,600 locations and a continuity rate that exceeds 99 percent. Today, we are the only haircare concept active in all 50 states, and we have a growing international operation north of the border in five Canadian provinces.

"We are proud to have helped hundreds of franchisees become local business owners and employers providing meaningful careers to thousands. It's been a great 24 years for Sport Clips, and we're excited about the winning future we see ahead for our clients, franchisees, stylists and team members."

Sport Clips Haircuts is headquartered in Georgetown, Texas. It was established in 1993 and began franchising in 1995. The sports-themed haircutting franchise, which specializes in haircuts for men and boys, is ranked by Entrepreneur Magazine as one of the “Fastest-Growing Franchises” and in the top 10 in its “Franchise 500.” There are more than 1,600 Sport Clips stores open in the U.S. and Canada. Sport Clips is the “Official Haircutter” of the Veterans of Foreign Wars (VFW), offers veterans preferential pricing on haircuts and franchises, and was named a “2016 Best for Vets: Franchises” by Military Times. Sport Clips provides “haircuts with heart” through its annual Help A Hero fundraiser that has given $5 million to the VFW; national partnership with St. Baldrick’s Foundation, the largest private funder of childhood cancer research grants; and other national and local philanthropic outreach. Sport Clips is a proud sponsor of Joe Gibbs Racing’s NASCAR driver Denny Hamlin and Furniture Row Racing’s Erik Jones and partners with numerous NCAA and professional sports teams.