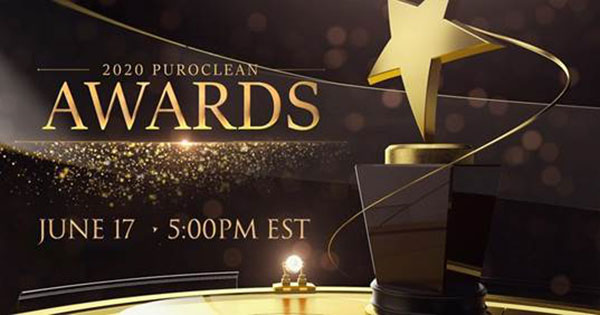 Tamarac, FL (June 23, 2020) – In lieu of the annual PuroClean convention awards ceremony, which was canceled due to the COVID-19 pandemic, the leading restoration and remediation franchise showcased its admiration and gratitude for its franchise owners in an innovative virtual celebration. The awards were presented live via Crowdcast during the virtual ceremony and included Franchise of the Year, Rookie of the Year and Hot Shot of the Year, among others.

“COVID-19 has brought unique challenges to businesses in nearly every industry, and while our particular segment continues to thrive, the pandemic has forced us to evaluate the way we traditionally do business – including looking at the format of our annual convention and awards ceremony,” said Mark W. Davis, Chairman and CEO. “While we wish we were able to celebrate in New Orleans together, we made the difficult decision to cancel our annual convention. However, we did not want for our award winners from this past year to go unnoticed, and I am proud of the effort by the home office team, creating a truly remarkable, innovative way to honor our 2019 top performers and reward our network for their hard work. I’m thrilled to have been able to participate in an extraordinary evening of celebration.”

While this year’s convention was postponed due to the COVID-19 pandemic, PuroClean’s executive team took a proactive approach to reformatting the company’s popular awards ceremony, putting together an innovative virtual awards presentation to honor their franchise owners. A livestream was themed as a news broadcast segment, opening with highlights of the dedicated work that PuroClean franchise owners have performed in their local communities since the pandemic hit and transitioned into the awards portion. The set-up allowed for chat integration and live video engagement with presenters and award winners.

PuroClean franchise owners who received awards for their efforts in 2019 include:

During the virtual awards ceremony, PuroClean’s executive leadership team acknowledged significant company updates on record-breaking growth year in and year out, from $89 million dollars in 2014 to a record $195 million in 2019 – a total of a 220% growth over a five-year period.  The company’s leadership team previewed this year’s annual Fall Regional Meetings, which will take place in Boston, MA; Nashville, TN and Las Vegas, NV, and will offer the franchise network hope for what lies ahead and provide new opportunities to grow and connect.

“PuroClean is ‘On the Move’ in pursuit of building a truly world-class brand and we remain committed to providing outstanding leadership to our franchise system across the United States and Canada,” said Steve White, President and COO of PuroClean. “Our leadership team, together with our outstanding community of franchise owners, continues achieving record-breaking success year after year. And part of how we build our world-class brand is to build a world-class culture through servant leadership, extreme ownership, and active collaboration.”

PuroClean has become one of the leading restoration franchise companies in the nation. Each year, PuroClean performs thousands of jobs throughout the United States and Canada, providing restoration services from common household mishaps to large-scale disasters.

Known as the “Paramedics of Property Damage®,” PuroClean provides water damage remediation, flood water removal, fire and smoke damage remediation, mold removal, and biohazard cleanup to commercial and residential customers. Founded in 2001, PuroClean has a comprehensive network of more than 300 franchise offices across North America. PuroClean technicians are thoroughly screened, insured, and trained in utilizing the latest in mitigation technology and procedures, while operating under a strict code of ethics. Each PuroClean office is independently owned and operated.