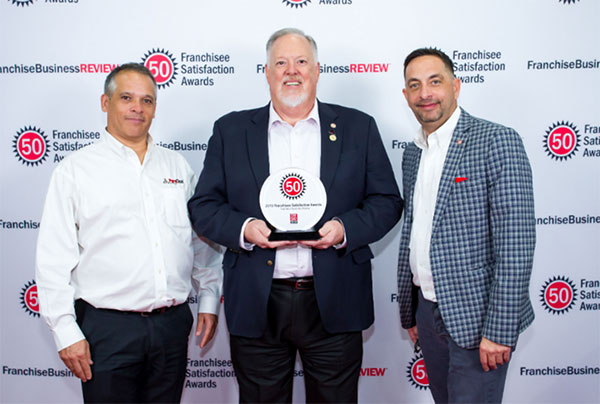 “In 2015, Vice Chairman Frank Torre and I came on board with ambitious goals to drive PuroClean’s growth in North America, while elevating our brand through new opportunities,” said Mark Davis, Chairman and CEO at PuroClean. “We believe wholeheartedly in servant leadership, working to build a team that is dedicated to a collective mission, and we are proud to receive honors like these, which support our long-term vision for the company.”

Recent honors include Franchise Business Review’s (FBR) ranking of PuroClean at number 22 in the Top 50: Large category for companies with 130-300 units in their annual Franchisee Satisfaction Awards. To determine winners for this award, FBR surveyed franchise owners on 33 benchmark questions about their experience and satisfaction regarding critical areas of their franchise systems, including executive leadership, training and support, systems and operations, core values, franchisee community, financial opportunity, general satisfaction, and a self-evaluation. Over 1,110 franchise brands were surveyed, representing thousands of franchise owners.

FBR also identified PuroClean as a Top Low-Cost Franchise for 2019, one of only 97 franchises to achieve the highly sought-after award for high franchisee satisfaction and an investment of under $100,000 at the time PuroClean franchisees participated in the survey. Thousands of franchisees representing over 150 low-cost brands participated in FBR’s franchisee satisfaction survey through September 2017 and February 2019, answering questions about their experience and satisfaction regarding critical areas of their franchise systems, including training and support, operations, franchisor/franchisee relations, and financial opportunity.

Echoing PuroClean’s commitment to onboarding new franchises owners at great value for even greater success, Entrepreneur magazine ranked PuroClean at number 35 on its list of Top Low- Cost Franchises for 2019. Based on the franchise’s scores in the publication’s esteemed Entrepreneur Franchise 500®, the list recognizes franchises that enable entrepreneurs to start a business for less than $150,000.

In addition to the nod from FBR, Franchise Times has named PuroClean a 2019 best buy in their third annual, consumer-focused Zor Awards program, which is designed to recognize brands in 10 of the industry’s most exciting and accessible categories. The ranking was based on the examination of management teams, expansion in the United States, profitability, financial performance, product or service offerings, unit openings and closings, recent litigation, and financial backing of each brand.

Lastly, PuroClean has been ranked number 62 in the annual Top 100 Global Franchises from Franchise Direct. This list is a premier, research-only ranking, which uses a methodology that goes beyond system size and financial performance, considering a host of criteria and giving each criterion a weighted value. The ranking places special focus on franchises that operate in at least two countries. The data is plugged into a computer formula making the outcome as objective as possible.

“We are thrilled to receive the awards and rankings from these very esteemed organizations within the franchise industry and look forward to continuing to deliver relentless customer service to property owners in the U.S. and Canada,” said Steve White, President and COO at PuroClean. “We are proud to have franchise owners who are committed to helping others in their time of need and contribute to making PuroClean the damage restoration company of choice for many. These awards symbolize that the culture we have developed is continuing to thrive and they are a testament to the efforts of our entire team.”

Since 2001, PuroClean has become one of the fastest-growing restoration franchise companies in the nation. Each year, PuroClean performs thousands of jobs throughout the United States and Canada, providing restoration services from common household mishaps to large-scale disasters.

Known as the “Paramedics of Property Damage®,” PuroClean provides water damage remediation, flood water removal, fire and smoke damage remediation, mold removal, and biohazard cleanup to commercial and residential customers. Founded in 2001, PuroClean has a comprehensive network of 280-plus franchise offices across North America. PuroClean technicians are thoroughly screened, insured, and trained in utilizing the latest in mitigation technology and procedures, while operating under a strict code of ethics. Each PuroClean office is independently owned and operated.