First responders receive 33% discount on franchise fee
DALLAS, May 19, 2017 /PRNewswire/ -- In celebration of National Police Week, the nation's largest barbecue chain announces a special opportunity for all first responders to join Dickey's Barbecue Pit by offering a franchise fee discount. In collaboration with Dickey's charitable organization, Barbecue, Boots & Badges, all first responders nationwide are offered $5000 off the initial Dickey's Barbecue Pit franchise fee, a discount of 33%.
"We have a strong connection to first responders through Dickey's charitable foundation, Barbecue, Boots & Badges, which focuses on serving those who protect us through local efforts," said Laura Rea Dickey, CEO of Dickey's Barbecue Restaurants, Inc. "At Dickey's, we strive to partner with franchisees who are dedicated, contributing members of their local communities, such as these men and women. Now, during National Police Week, is an ideal time to launch this opportunity for these important community members to join the Dickey's family." 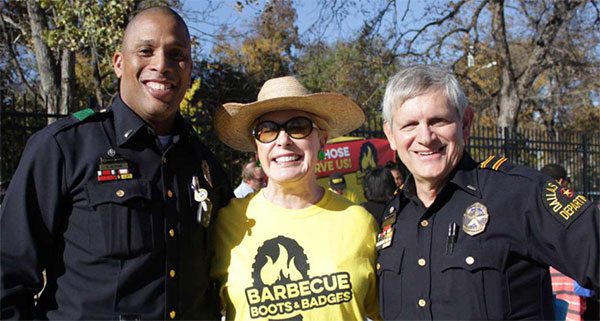 Similar to Dickey's franchise discount for military, this opportunity applies to law enforcement, firefighters and EMT. Dickey's recent involvement with first responders also includes the launch of Barbecue, Boots and Badges' 'Invest in a Vest' initiative, which aims to reduce risk for police officers by providing life-saving bullet proof vests and included a kickoff donation of ballistic plates to Dallas Police Department's entire gang unit.  In addition, Dickey's has a longstanding offer of 50% off for first responders that dine in at select locations.
About Dickey's Barbecue Restaurants, Inc.
Dickey's Barbecue Restaurants, Inc., the nation's largest barbecue chain was founded in 1941 by Travis Dickey. Today, all meats are still slow smoked on-site in each restaurant. The Dallas-based family-run barbecue franchise offers several slow-smoked meats and home style sides with 'No B.S. (Bad Stuff)' included. The fast-casual concept has expanded to nearly 600 locations in 44 states. In 2016, Dickey's won first place on Fast Casual's "Top 100 Movers and Shakers" list. Dickey's Barbecue Pit has also been recognized by Entrepreneur Magazine, Franchise Times, and Nation's Restaurant News.
About Barbecue, Boots & Badges
Enthusiastically led by Maurine Dickey, Barbecue, Boots & Badges supports local law enforcement, firefighters and their families. The foundation is national, yet the support is intensely local — benefiting first responders who put their lives on the line every day, serving the public. The foundation exists to serve those who protect us. For more information, visit www.bbabfoundation.org.