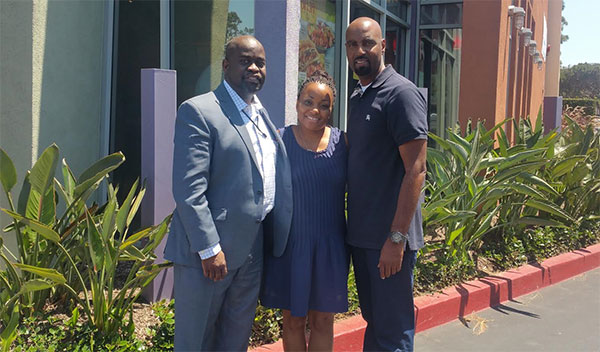 New Dickey’s locations are slated to open in Huntington Beach, Costa Mesa, Cerritos/Artesia, Lakewood and Yorba Linda
(Huntington Beach, CA) Dickey’s Barbecue Pit is expanding again throughout Southern California with new locations planned for Huntington Beach, Costa Mesa, Cerritos/Artesia, Lakewood and Yorba Linda. The five-store development agreement with PK Group, Inc. will open the first location in Huntington Beach in early 2017. The Costa Mesa store will follow in late summer to early fall of 2017.
PK Group, Inc. was formed out of a long-term friendship between entrepreneurs Kelvin Solomon and Phillip Peoples. Solomon is a restaurant veteran with 20 years in the restaurant industry and also owns other businesses including a nursing school which has tripled in size over the last decade. Peoples owns several very successful Transportation and Logistic Companies. The two have been friends for over 40 years and always wanted to open a business together. After sampling the Texas-style barbecue at Dickey’s, the duo immediately knew their next venture. “I look forward to opening my first restaurant and am thrilled to go into business with Phil,” Solomon says. “Dickey’s is doing great things and we are excited to be a part of the brand’s growth in California.” Dickey’s Barbecue Pit now has more than 100 locations in California.
“Dickey’s has grown exponentially throughout California and we look forward to adding these five new locations,” says Roland Dickey, Jr., CEO of Dickey’s Barbecue Restaurants, Inc. “After Texas, California has the most Dickey’s locations with new stores opening weekly. We congratulate Kelvin Solomon and Phillip Peoples on this venture.”
To find the Dickey’s Barbecue Pit nearest you, click here. Find Dickey’s on Twitter,  Facebook and Instagram.
About Dickey’s Barbecue Restaurants, Inc.
Dickey’s Barbecue Restaurants, Inc., the nation’s largest barbecue chain was founded in 1941 by Travis Dickey with the goal of authentic slow-smoked barbecue. Today, all meats are still slow smoked on-site in each restaurant living up to the company tagline, “We Speak Barbecue.” The Dallas-based family-run barbecue franchise offers a quality selection of signature meats, home style sides, tangy barbecue sauce and free kids’ meals every Sunday. The fast-casual concept has expanded to more than 550 locations in 43 states. This year Dickey’s won first place on Fast Casual’s “Top 100 Movers and Shakers” and ranked in the top ten of Franchise Times’ “Fast and Serious”. Dickey’s Barbecue Pit was recognized for the third year by Nation’s Restaurant News as a “Top 10 Growth Chain” and by Technomic as the “Fastest-growing restaurant chain in the country.”