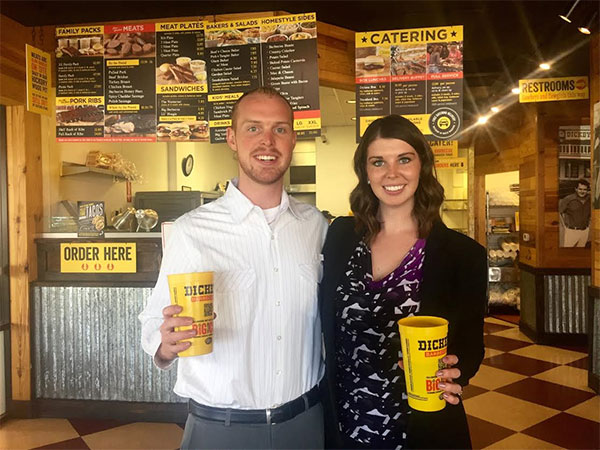 The 10-store development agreement will double Dickey’s presence in The Grand Canyon State
(Phoenix, AZ) Dickey’s Barbecue Pit is proud to announce its expansion throughout Arizona with a recently executed 10-store development agreement. The first store will open in Surprise, northwest of Phoenix, in 2016, with two stores opening per year for the next five years. This agreement marks one of the largest franchise agreements for Dickey’s with two of its youngest Owner/Operators.
Owner/Operators and siblings Tiffany Oder and Chad Burge come from a family of multi-unit franchisees. Only 25 years old, Oder obtained her bachelor’s and master’s degrees in accounting from Arizona State University followed by her CPA license before embarking on her career as an entrepreneur. Her brother Chad is currently attending college at Embry Riddle University and plans to join the family business as a co-owner. “We are excited to meet our fellow franchisees and grow with the Dickey’s brand,” Oder says. “We knew as soon as we first tried the food that we wanted to invest in Dickey’s. We are excited to serve high-quality, Texas-style barbecue to our home state while being a part of an energetic, growing brand.”
“We look forward to continuing to expand our brand presence throughout Arizona,” says Roland Dickey, Jr., CEO of Dickey’s Barbecue Restaurants, Inc. “This development agreement will double our locations in The Grand Canyon State, and we congratulate Tiffany and Chad on their new endeavor.”
About Dickey’s Barbecue Restaurants, Inc.
Dickey’s Barbecue Restaurants, Inc., the nation’s largest barbecue chain was founded in 1941 by Travis Dickey with the goal of authentic slow smoked barbecue. Today, all meats are still slow smoked on-site in each restaurant living up to the company tagline, “We Speak Barbecue.” The Dallas-based family-run barbecue franchise offers a quality selection of signature meats, home style sides, tangy barbecue sauce and free kids’ meals every Sunday. The fast-casual concept has expanded to over 540 locations in 43 states. Dickey’s was recognized for the third year by Nation’s Restaurant News as a “Top 10 Growth Chain” and by Technomic as the “Fastest-growing restaurant chain in the country.”