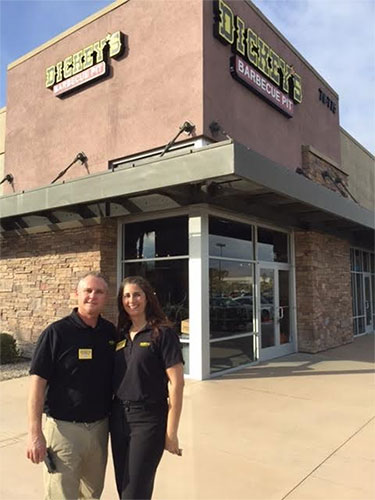 Owner/Operator Michael Tucker owns La Quinta location, and will expand into Northern San Diego County
(San Diego, CA)  Dickey’s Barbecue Pit has recently signed a 12-store development agreement with Owner/Operator Michael Tucker. Already the owner of the La Quinta Dickey’s location, Tucker’s agreement originally contained four stores, which are slated to open in Indio, Moreno Valley and Redlands. The new agreement adds eight stores to the existing four-store deal. Tucker has extended the agreement with the barbecue brand to encompass the northern part of San Diego County, starting in Mira Mesa and extending north. He will also open a new location as far south as National City.
Dickey’s Barbecue Pit now has more than 100 stores in California and is rapidly expanding in The Golden State. The new stores will all be opened using Dickey’s new store model, complete with sustainable elements such as reclaimed wood throughout the dining room and Dickey’s proprietary blend of wood pellets to be used in the smoker.
An award-winning entrepreneur, Michael Tucker also owns several franchises with Dallas-based convenience store 7-Eleven which have been in operation for the last four years. “The community in La Quinta has wholeheartedly embraced us, and so many people who came during our grand opening have become loyal guests who stop in several times per week,” Tucker says. “We are delighted to serve our community delicious barbecue and look forward to expanding into San Diego County.”
“Dickey’s has grown rapidly along the West Coast, and we are proud to have dedicated Owner/Operators such as Michael Tucker who further our brand every day,” says Roland Dickey, Jr., CEO of Dickey’s Barbecue Restaurants, Inc. “The Dickey family congratulates Michael on his development agreement and we look forward to celebrating many grand openings in the future.”