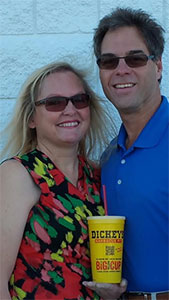 Owner/Operator Doug Dubin has invested in the entire Las Vegas area and parts of Southern California
(Las Vegas, NV) Dickey’s Barbecue Pit has executed a new development agreement for eight stores, with six to open in Nevada and two in Southern California. Originally from Montana, Owner/Operator Doug Dubin intends his investment to be a family business. His family has three generations of restaurant experience, and the fact that Dickey’s is still owned and operated by its founding family was a clear selling point as Dubin looked for franchise concepts.

Having personally experienced job scarcity resulting from the economic downturn, Dubin relocated his family to Pahrump, Nevada and became a car salesman. “We are opening a business because we want to provide career opportunities for our family and other families,” Dubin says. “We chose to invest in Dickey’s not only because of the reasonable franchise fees, but because of the level of support. I always know that someone at the home office will answer the phone when I call.” Dubin’s entire family plans to work in the new stores. His wife, brother and three daughters will all help manage the operations, and Dubin’s stores will hopefully be a future place of employment for his two young nephews as well.
Dubin will open his first two stores in Pahrump and Summerlin, NV in 2016. Eventually Dubin will open six stores in the Las Vegas Valley and two in Southern California.
“Dickey’s is still family owned and operated after nearly 75 years,” says Roland Dickey, Jr., CEO of Dickey’s Barbecue Restaurants, Inc. “We are proud to give other families the opportunity to own a business by investing with us.”
To learn more about franchising with Dickeys, please complete the form.
0
Add Franchises To Basket<br /> For Free Information
Request Free
Information