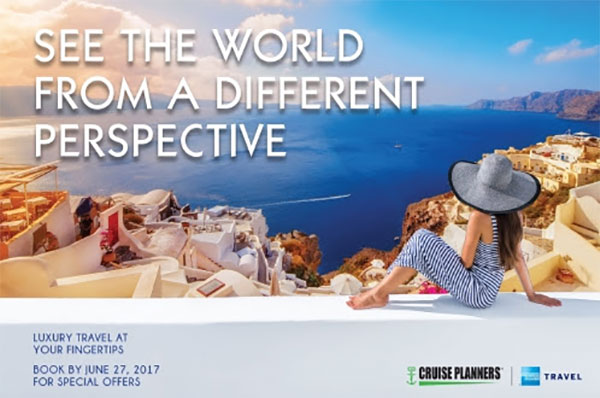 “We know that our one-of-a-kind marketing, innovative technology and comprehensive training set us apart in the travel franchise industry, and we are excited to add a gold award for our newly intensified luxury program to our shelf,” said Vicky Garcia, COO and co-owner of Cruise Planners, an American Express Travel Representative. “Giving back is at the core of what we believe in at Cruise Planners, so we are especially honored to receive a gold Magellan Award in recognition of CP Cares™, our non-profit organization that has supported a variety of causes throughout the years.”

“Cruise Planners travel agents have different specialties and business styles, so we are constantly innovating to ensure we anticipate and exceed the needs of our entire network, providing our travel agents with the best tools in the industry,” Garcia said. “There is a reason franchise owners choose Cruise Planners and our success is only possible with the success of our franchisees and their ability to maximize the resources we provide them.”


Cruise Planners, an American Express Travel Representative, is the nation’s largest home-based travel agent franchise network in the travel industry. Cruise Planners operates a network of more than 1,800 franchise owners who independently book amazing vacation and travel experiences for their clients. The Florida-based Home Office Team positions a nation-wide network of franchise owners for success by providing innovative marketing, booking and technology tools, as well as professional development and hands-on training with the industry’s top executives. The company continues to be lauded and has been named the No.1 travel franchise by Entrepreneur magazine for 14 consecutive years. Cruise Planners was recently featured in Entrepreneur as one of the top 30 franchise innovators in technology, has been consistently named as one of the Top Women-Owned Businesses by the South Florida Business Journal, is on the Inc. 5000 list as one of the fastest-growing private companies in America, has been ranked as the #1 travel franchise by Franchise Business Review for 6 years in a row, and was recognized as one of the Top Workplaces by the Sun Sentinel since it started ranking companies.