Company owners celebrate annual top producer success on a journey through the untouched Galapagos Islands on board Celebrity Xperience
Coral Springs, Fla. – June 27, 2017 – Cruise Planners, an American Express Travel Representative, the nation’s largest home-based travel franchise business network, invited this year’s top-producing travel advisors from the Cruise Planners franchise network on an exclusive week-long trip to the shores of the Galapagos Islands. Each year, Cruise Planners co-owners Michelle Fee and Vicky Garcia, travel with top producers and this year they all set sail on a trip of a lifetime on the forty-eight passenger Celebrity Xperience. 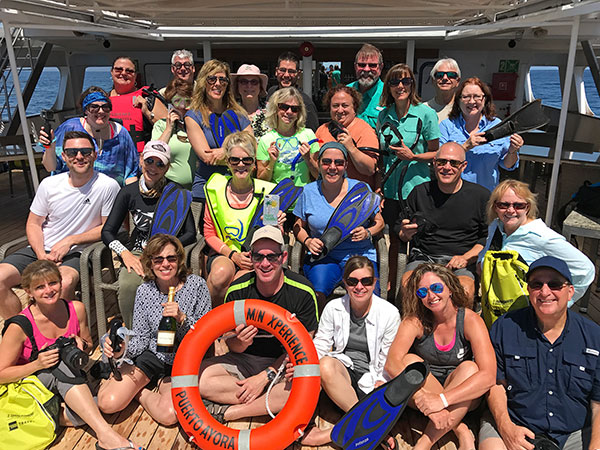 “The goal of our exclusive trip for our top producing advisors is to expose them to new destinations and create buzz about the places we visit,” said Michelle Fee, CEO and co-owner of Cruise Planners, an American Express Travel Representative. “Our agents have access to FAM trips throughout the year, but we always select bucket-list destinations for this annual tradition such as Australia, the Holy Land, Italy and India to name a few. This year, we were excited to select the Galapagos on Celebrity Cruises with its exotic, natural beauty.”

Invitees jetted from their hometowns to Baltra Island, Ecuador where they departed from the port, on board Celebrity Xperience, toward the Galapagos Islands. The group, hosted by a team from Celebrity Cruises, explored islands including Isabella Island, Santa Cruz Island, Genovesa Island and Batolome Island.

From marine iguanas to blue-footed boobies and tortoises, the symbol of the Galapagos, wildlife sighting was a major part of the trip. Travelers experienced the animal life and scenery via customizable Zodiac rides, kayaking, hiking to the top of a volcano and other excursions. Agents also visited historic sites such as the Charles Darwin Research Station and El Barranco, more commonly known as Prince Phillip’s Steps.

“Celebrity Cruises created a relaxing atmosphere on board Celebrity Xperience and an exciting itinerary jam-packed with adventures on shore,” Fee said. “The islands are filled with such incredible creatures. Who wouldn’t be impressed by a 100-year-old tortoise?”

Cruise Planners attendees gained first-hand insight into sailing the Galapagos Islands with Celebrity Cruises, and can now share their experiences with future travelers and help sell getaways to those adventurous shores.

“I encourage more travelers to visit this pristine piece of paradise on Celebrity Cruises,” Fee said. “The trip has already generated sales—one Cruise Planners top producing travel agent posted about the trip to her social media page, which resulted in securing a 5-cabin group on a future Celebrity cruise to the Galapagos.”

About Cruise Planners, an American Express Travel Representative
Cruise Planners, an American Express Travel Representative, is the nation’s largest home-based travel agent franchise network in the travel industry. Cruise Planners operates a network of more than 1,800 franchise owners who independently book amazing vacation and travel experiences for their clients. The Florida-based Home Office Team positions a nation-wide network of franchise owners for success by providing innovative marketing, booking and technology tools, as well as professional development and hands-on training with the industry’s top executives. The company continues to be lauded and has been named the No.1 travel franchise by Entrepreneur magazine for 14 consecutive years. Cruise Planners was recently featured in Entrepreneur as one of the top 30 franchise innovators in technology, has been consistently named as one of the Top Women-Owned Businesses by the South Florida Business Journal, is on the Inc. 5000 list as one of the fastest-growing private companies in America, has been ranked as the #1 travel franchise by Franchise Business Review for 6 years in a row, and was recognized as one of the Top Workplaces by the Sun Sentinel since it started ranking companies.