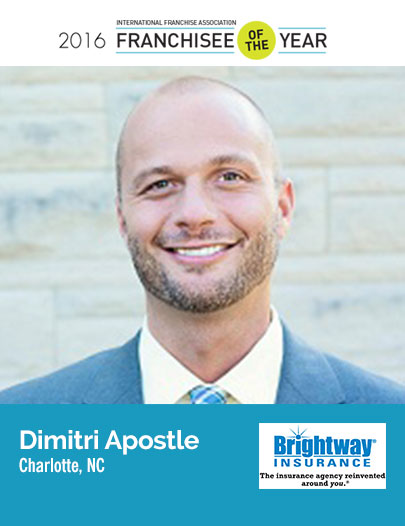 Brightway Insurance is a national property/casualty insurance retailer selling through a network of franchised independent agencies throughout the country.

“In business since 2014, Dimitri Apostle has nearly doubled his sold policies in the last year while making a donation to his community for every quote he provides a customer,” said Brightway President, Talman Howard. “He sets a great example for new Agency Owners and for potential franchisees looking to open a Brightway office in their own hometown, and we are thrilled to have him as part of the Brightway family.”

Brightway Agency Owners have access to more than twice as many insurance companies as other independent agents. They focus strictly on selling and growing their books of business, while Brightway’s team of experts handle service, carrier relationships and technology. As a result, Brightway agents consistently sell more new personal lines of business than do traditional independent agents.

“I am humbled and honored to be recognized as the Franchisee of the Year,” said Apostle, who has more than 13 years of experience in the insurance industry, an obsession for getting the details right and a reputation for providing fast and friendly customer service.

“The Brightway model allows me to make finding the right coverage for my customers my top priority, while helping other in my community,” he added.

About Brightway Insurance
Brightway Insurance is a national property/casualty insurance retailer selling through a network of franchised independent agencies throughout the country. With over $423 million in annualized premium written, the company is the nation’s seventh largest privately held Personal Lines independent insurance agency. Brightway provides its Agency Owners with access to more insurance companies than any other agency, along with a comprehensive system of support that frees them up to focus on customizing policies that meet their customers’ needs.

Brightway began franchising operations in 2008 and has since grown to 770 people in 12 states serving customers in all 50 states. In 2015, Forbes recognized the company as America’s No. 1 Franchise to Buy. Additionally, the company was named a top franchise three years in a row by Entrepreneur magazine and one of the fastest-growing private companies in America nine consecutive years by Inc. 5000.

About the International Franchise Association
Celebrating 55 years of excellence, education and advocacy, the International Franchise Association is the world's oldest and largest organization representing franchising worldwide. IFA works through its government relations and public policy, media relations and educational programs to protect, enhance and promote franchising and the more than 780,000 franchise establishments that support nearly 8.9 million direct jobs, $890 billion of economic output for the U.S. economy and 3 percent of the Gross Domestic Product (GDP). IFA members include franchise companies in over 300 different business format categories, individual franchisees and companies that support the industry in marketing, law, technology and business development.