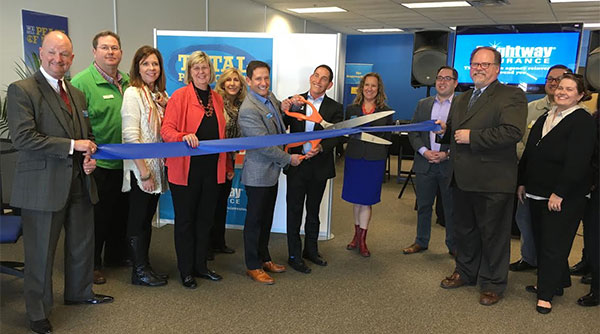 “Incubator” location turns insurance agents into Agency Owners
JACKSONVILLE, Fla. (February 11, 2016) – Owning your own business is the American dream. For insurance agents in and around Atlanta, that dream just got closer.
On Wednesday, Feb. 10, Brightway Insurance, the country’s seventh-largest privately owned Personal Lines insurance agency, held a ceremonial ribbon cutting event as it opened a location in Kennesaw, Ga. that will house a brand-new program for insurance professionals who want to make the transition from agent to owner. The program is called the BrightwayBridge.
Agents participating in this pioneering venture will work out of the company-owned location and focus on selling new policies and building their businesses while incurring a fraction of the costs that they would if they were to open their own offices.
After establishing their own customer base, the newly minted Brightway Agency Owners seamlessly transition to their own office spaces to continue building their businesses and their dreams.
In what’s believed to be a first-of-its-kind initiative, the BrightwayBridge will not only create jobs, it will fuel local entrepreneurship.
“From the start, Brightway has been about creating win-win-win business outcomes,” said Brightway Founder and Owner David Miller. “For many, opening a Brightway agency from scratch is attainable – they have the experience, the drive and the capital to succeed. For others, they have the experience and the drive, but they may lack the capital. We want them to succeed and we want them to experience the American dream, too. So, we’re making the BrightwayBridge available to move them from insurance agent to agency owner.”
Brightway has been ranked the #1 Franchise to Buy by Forbes, one of the Inc. 5000 Fastest Growing Private Companies in America (for eight consecutive years) and named a Top 500 Franchise by Entrepreneur magazine three years running. The company operates 117 locations in 11 states.